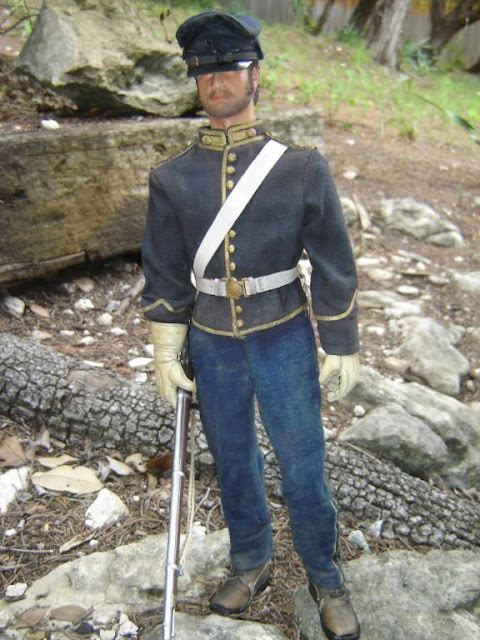 The United States had two armies during the 19th century. The first, a standing army commonly referred to as the U.S. Army, had been authorized by the Congress in 1789. Designated the regular army, this force was composed of officers commissioned by Congress and enlisted men who joined for a five year period. In 1792, Congress created a second army intended as an auxiliary to the regulars called the militia. One major difference between the regulars and militia was the first was a national force while the second was the armies of the various states. Congress stipulated three instances when the militia could be called into federal service: to execute the laws of the United States, to suppress insurrections, and to repel invasions. This two-tiered arrangement formed the basis of the American military establishment during the Mexican War. 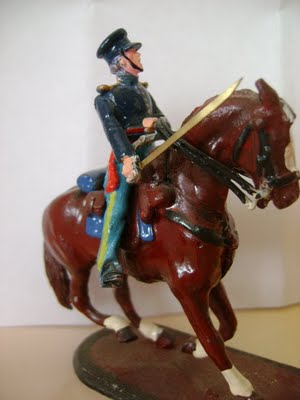 The U.S. Army was unprepared for war. While Congress had authorized a strength of 8,613 men and officers, the actual number of soldiers in uniform was fewer than 5,500. Many of the regimental commanders had entered the service before the War of 1812 and were too elderly and infirm for active duty. Companies were far below their authorized strength of forty-two privates with many carrying only half that number on their rolls. Reacting to the poor state of the army once war broke out, Congress increased the number of privates within individual companies to one hundred. It also created a company of the U.S. Engineers as well a new regiment of U.S. Mounted Rifles. These measures turned out be stopgaps at best.

The presence of a large number of graduates from the United States Military Academy worked in favor of the U.S. Army. These officers, mostly lieutenants and captains, formed a tight knit corps whose leadership ability and training helped offset the initial shortage of manpower. Historians point out that their ranks included men such as George G. Meade, Ulysses S. Grant, George B. McClellan, P.G.T. Beauregard, Braxton Bragg, Joseph E. Johnston, and Robert E. Lee, officers who later went on to command the great armies of the Civil War.

The militia system had already proven unreliable by the time of the Mexican War and had undergone substantial revision. Two issues emerged during the War of 1812 that demonstrated its flaws. First, many states prohibited their troops from participating in military operations on foreign soil. Second, by law a militiaman could only serve for a period of ninety days, meaning that recruiting, training, and marshaling occupied most of a unit's time with little left over for campaigning. As a solution to this problem, Congress created a subclass of militia called volunteers who were not confined by these two restrictions. On May 13, 1846, Congress authorized President Polk to raise 50,000 12-month volunteers.

Although both composed a part of the American Army, regulars and volunteers were notably different. Observers noted little interaction between officers and men, with each occupying a clearly defined station within the military establishment. Most Americans avoided enlisting in the regulars, guaranteeing that a high percentage of privates, corporals, and sergeants were foreign born. The combination of aristocratic officers and foreign "hirelings" made many Americans suspicious of the regulars. After all, what American citizen would settle for $7 a month as an army private unless forced to by dire circumstance? The volunteer, on the other hand, seemed to fit the spirit of the young republic because he was a citizen-soldier. Politics entered into the system as most volunteers elected their own officers. Volunteer units were raised locally, allowing friends, neighbors, and relatives to serve together. Although nominally under federal authority, volunteers maintained strong ties to their home states. The democratic nature of the volunteers meant that discipline in this corps was more lax than in the regulars.

More troops were needed as the war progressed. In November 1846, Congress issued an additional call for volunteers after realizing that most of the one year men would leave at the expiration of their terms. This second wave of volunteers was enlisted for the duration of the war. On February 11, 1847, Congress created ten additional regiments of regulars to serve for the period of the war. In all, 26,922 regulars and 73,260 volunteers served at some point during the Mexican War.

The combat elements were the same for both the regulars and the volunteers. The majority of troops were raised and trained as infantry and armed with flintlock muskets. The regulars maintained two regiments of light cavalry called dragoons with a third created for the war. Several regiments of mounted volunteers were raised that served mainly with Taylor's Army of Occupation and Kearny's Army of the West. Artillery formed the third branch of service. Just prior to the outbreak of the war, the army equipped several companies as "flying artillery" in which each cannoneer had his own mount. The innovation meant that the unit could gallop around the battlefield, bringing its guns to bear wherever they were most needed. This style of artillery was instrumental in several U.S. victories.

Readers who like military history will find the battles and leaders of the Mexican War extremely interesting. The American military is fascinating, too, because it reveals much about society in the Age of Jackson. Several works are recommended to those who want to learn more about the American Army in the Mexican War. John Porter Bloom's 1953 Emory University Ph.D. dissertation, "With the American Army in Mexico, 1846-1848," remains an outstanding study of the American soldier in Mexico. More accessible to most readers will be James M. McCaffrey's Army of Manifest Destiny: The American Soldier in the Mexican War, 1846-1848. A more recent work which examines the army is Richard Bruce Winders' "Mr. Polk's Army: The American Military Experience in the Mexican War." Also recommended are the many volumes of published letters and diaries that place the war on a personal level, giving the reader a "soldier's eye view" of the war.