For two decades, Fort Bowie strategically controlled Apache Springs along the Butterfield Trail in the Arizona Territory in its conflict with the Chiricahuas. Gen. George Crook led his cavalry from Bowie and Fort Huachuca for ten months across the Southwest and into Mexico to find Geronimo and negotiate his first surrender in 1885-’86. At the time of European encounter, they, with their close kinsmen of the Tchihende and Ndendahe groups, were living in 15 million acres (61,000 km2) of territory in southwestern New Mexico and southeastern Arizona in the United States, and in northern Sonora 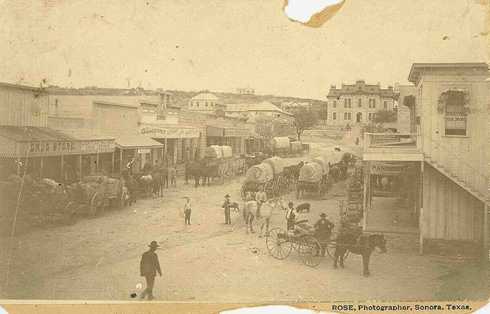 and Chihuahua in Mexico. Today, only two tribes of the Chiricahua Apache located in the United

and the Chiricahua tribe located on theMescalero 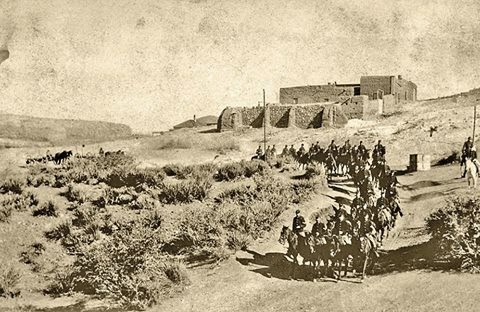 Tsokanende (Chiricahua) Apache division was once led, since the beginning of the 18th century, by chiefs as Pisago Cabezon, Relles, Posito Moraga, Yrigollen, Tapilà, Teboca, Vivora, Miguel Narbona, Esquinaline, and finally Cochise (whose name was derived from the Apache word Cheis, meaning "having the quality of oak") and, after his death, his sons Tahzayand, later, Naiche, under the guardianship of Cochise's war chief Nahilzay, and the independent chiefs Chihuahua, Skinyaand Pionsenay; Tchihende (Mimbreño) people was led, during the same period, by chiefs as Juan Josè Compa, Fuerte a.k.a.Soldado Fiero, Mangas Coloradas, Cuchillo Negro, Delgadito, Ponce, Nana, Victorio, Loco, Mangus; Ndendahe Apache people, in the meanwhile, was led by Mahko, Mano Mocha, Coleto were the last leaders of Central Apaches, and their mixed Apache group was the last to continue to resist U.S. government control of the American Southwest. the Nednai (Nednhi) and Bedonkohe (recte, both of them together: Ndendahe). Today, all are commonly referred to as Chiricahua, but they were not historically a single band nor the same Apache division, being more correctly identified, all together, as "Central Apaches".

Many other bands and groups of Apachean language-speakers ranged over eastern Arizona and the American Southwest. The bands that are grouped under the Chiricahua term today had much history together: they intermarried and lived alongside each other, and they also occasionally fought with each other. They formed short-term as well as longer alliances that have caused scholars to classify them as one people. The Apachean groups and the Navajo peoples were part of the Athabaskan migration into the North American continent from Asia, across the Bering Strait from Siberia.
As the people moved south and east into North America, groups splintered off and became differentiated by language and culture over time. Some anthropologists believe that the Apache and the Navajo were pushed south and west into what is now New Mexico and Arizona by pressure from other Great Plains Indians, such as the Comanche and Kiowa . Among the last of such splits were those that resulted in the formation of the different Apachean bands whom the later Europeans encountered: the southwestern Apache groups and the Navajo. Although both speaking forms of Southern Athabaskan, the Navajo and Apache have become culturally distinct.
From the beginning of EuropeanAmerican/Apache relations, there was conflict between them, as they competed for land and other resources, and had very different cultures. Their encounters were preceded by more than 100 years of Spanish colonial and Mexican incursions and settlement on the Apache lands.
The United States settlers were newcomers to the competition for land and resources in the Southwest, but they inherited its complex history, and brought their own attitudes with them about American Indians and how to use the land. By the Treaty of Guadalupe Hidalgo, the US took on the responsibility to prevent and punish cross-border incursions by Apache who were raiding in Mexico.
The Apache viewed the United States colonists with ambivalence, and in some cases, enlisted them as allies in the early years against the Mexicans. In 1852, the US and some of the Chiricahua signed a treaty, but it had little lasting effect.
During the 1850s, American miners and settlers began moving into Chiricahua territory, beginning encroachment that had been renewed in the migration to the Southwest of the previous two decades.
This forced the Apachean people to change their lives as nomads, free on the land. The US Army defeated them and forced them into the confinement of reservation life, on lands ill-suited for subsistence farming, which the US proffered as the model of civilization. Today, the Chiricahua are preserving their culture as much as possible, while forging new relationships with the peoples around them. The Chiricahua are a living and vibrant culture, a part of the greater American whole and yet distinct based on their history and culture.

The Apache–Mexico Wars, or the Mexican Apache Wars, refer to the conflicts between Spanish or Mexican forces and theApache peoples. The wars began in the 1600s with the arrival of Spanish colonists in present day New Mexico. War between the Mexicans and the Apache was especially intense from 1831 into the 1850s. Thereafter, Mexican operations against the Apache coincided with the Apache Wars of the United States, such as during the Victorio Campaign.
Mexico continued to operate against hostile Apache bands as late as 1915.Victorio '​s War , or the Victorio Campaign, was an armed conflict between the Apache followers of Chief Victorio, the United States, and Mexico beginning in September 1879. Following his escape from the San Carlos Indian Reservation in

southeastern Arizona, Victorio led a guerrilla war across the Southwest and northern Mexico. Many engagements were fought until the Mexican Army killed Victorio and defeated his warriors in October 1880. After Victorio's death, Chief Nana continued the war into 1881. Following the Battle of Cibecue Creek, in August 1881, Nana and his band joined Geronimo