THE BATTLE OF PORTA LAME

partizans by skytrex 20mm
The battle of Porta Lame constitutes a significant episode in the context of the Italian resistance movement and is one of the most important battles that took place in an urban centre in Italy in that period.

20mm irregular
It was fought on 7 November 1944 near Porta Lame in Bologna and was engaged by a contingent from detachments of 7th GAP and the other forces of the Italian Social Republic and Germany. Despite the superiority of the latter, the partisans managed to escape the encirclement of their progressive stations causing numerous losses among the ranks

dixon
The situation in the autumn of 1944, allied forces which were advancing  laboriously up the peninsula faced the German armies on the Gothic line in the Appennino tosco-emilian mountains. Resistance forces present in the urban centers of the territories occupied by German troops, encouraged by the recent successes of the Anglo-American army that summer had managed to force themselves into more points of the enemy's fortified positions, preparing  real actions of armed uprising in support of the imminent breaktrough. The province of Bologna, in particular, had already been partially reconquered, the city itself seemed now next its release.

0preiser 1.72
In view of the impressive action in the mountains  detachments of the 7th GAP had installed two bases, the main (230 units), led by Giovanni Martini "Paul" with Ferruccio Magnani "Giacomo" Political Commissar, in the basement of the hospital destroyed by Allied bombing, and a second led by Bruno Gualandi "Aldo" with Lino Michelini

"William" Political Commissar. (75 units) in a stable at Slaughter lane near the former river port city. 6 and 15 of November 7, there was a calamity, the position was discovered (the base of the Slaughter lane) by the Germans,and so began the first phase of the battle. The German forces rose in a coordinated plan of attack, and narrowing the scope of action for the partizans, also intensifying the pressure by using weapons such as mortars,  88 mm's. Late in the afternoon  even a Tiger tank that was working in the nearby front. 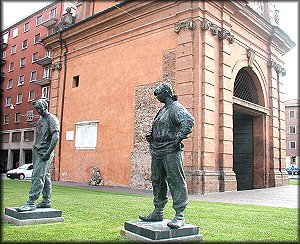 When, after more than ten hours of fighting German troops occupied the premises of strategic buildings, these  had already been evacuated, and the germans  lost their tracks due to the abundant use of smoke.
At the same time began the second phase of the battle, when the partizans settled among the ruins of the ospedale Maggiore, following the guidelines of a tactical plan prepared to this end, but were quickly surrounded the enemy forces . The rapidity of simultaneous attack not allowed any reaction ordered by German troops. At the end of the day  the fallen was 11 deaths among the Republican, 2 Germans, 13 members of the partisan formations and 1 civilian.

the importance and significance of the battle  are such as to make you feel one of the most significant among those fought within large urban centres in Europe during World War II.
However, in the days following the clash, the possibility of a joint action between the partisan forces and Allied was destined not to materialize: on 13 November 1944 British General Harold Alexander with a proclamation declaring that the offensive  on the Gothic line was temporarily sold out.

As a result of the non insurrection occurred several episodes of reprisals against partisans: infiltration of police officers and some people, as well as the discovery of other bases , resulted in numerous casualties among the departments of the GAP.
The advance through the Po Valley suffered a setback which would last until the spring of 1945, when, under the impetus of the offensive.Churchill said that all partizan action had no bearing on gthe out come of the war and so we can say that a lot of innocent people were killed for no real gain